From Wizkid dropping his long-awaited mixtape to Beyonce dropping the first pictures of her twins, to Game of Thrones dropping, we have summarized the events that trended last week and top reactions from Social Media.

Similar to the way she announced her pregnancy, Beyonce took to Instagram to post the very first photo of her twins – Sir Carter and Rumi, one month after their birth. Of course, stans, superfans and admirers had a thing or two to say about the queen. See some of their reactions.

Wizkid’s much-anticipated mixtape – Sounds from the other side, stylized SFTOS is finally out. The body of work, which basically serves to introduce him to a larger global audience, got lots of reactions from fans, haters and well-wishers. See them see them.

Before you murmur, before you complain, before you say you're not feeling the songs, remember it's Wizkid, it grows on you with time. #SFTOS

When you are listening to SFTOS in Nigeria and you remember the hardship in Nigeria compared to other side pic.twitter.com/DjyLPcSAMh

Sony really pushed Wizkid to the forefront of global music with SFTOS. I am happy the boy took on the challenge. Very inspiring

Wizkid ??
Not easy flowing in different foreign sounds.. just might be the 1st successful african to blend internationally

#SFTOS sitting @ no.4 on the US @applemusic Top albums chart. #WizkidayoArmy, we made this possible. Let's take it to Number 1 ??? pic.twitter.com/e6ebZeVJTm

Wizkid's album, #SFTOS has been added to PlayStation Music. There's only one real Starboy. Nuff said.

Roger Federer has once again proven why he is the real King of Tennis. He won his 19th grand slam and his 8th Wimbledon yesterday. This is a new individual record broken in the history of Tennis. Congratulations are in order for the greatest of all time.

The highly anticipated 7th season of the greatest show of all time – Game of thrones is finally out. The series which is arguably everyone’s favorite has been in everyone’s lips. We don’t want to share spoilers (for those who haven’t seen it yet) so see reactions from fans of the 5 star show.

when everyone is hype for the return of game of thrones but your understanding is literally:
everyone dies
jon snow
winter is coming?

So ready for tonight! @GameOfThrones is gonna be ?

Want a beer?
No thank you Game of Thrones is on in 10 hours and I need to be sharp.

Anyone else gassed as me and Tommy for new game of thrones pic.twitter.com/K5mwFdmi6K

game of thrones is so close I can taste it. I can taste the white walkers on my tongue. they're like frosty slurpy snow cones. mmmmmm.

Nigerian-American professor, Nnedi is an award- winning author of books in the sci-fi, magical futurism, juju fantasy and mystical realism genre. Her novel – Who Fears Death has been optioned by HBO and would be made into a TV series, with George R. R. Martin (creator of Game of Thrones) is the executive producer. This is profound.

My novel WHO FEARS DEATH has been optioned by @HBO & is now in early development as a TV series with George RR Martin as executive producer. pic.twitter.com/POF7Dj2hWP

I think journalism died the day the internet was born… @Nnedi's WHO FEARS DEATH is in development w/@HBO Read More https://t.co/ymUNTRydeX pic.twitter.com/fz6r0hwrBN

Some people even tried to deny her credit, but God pass them 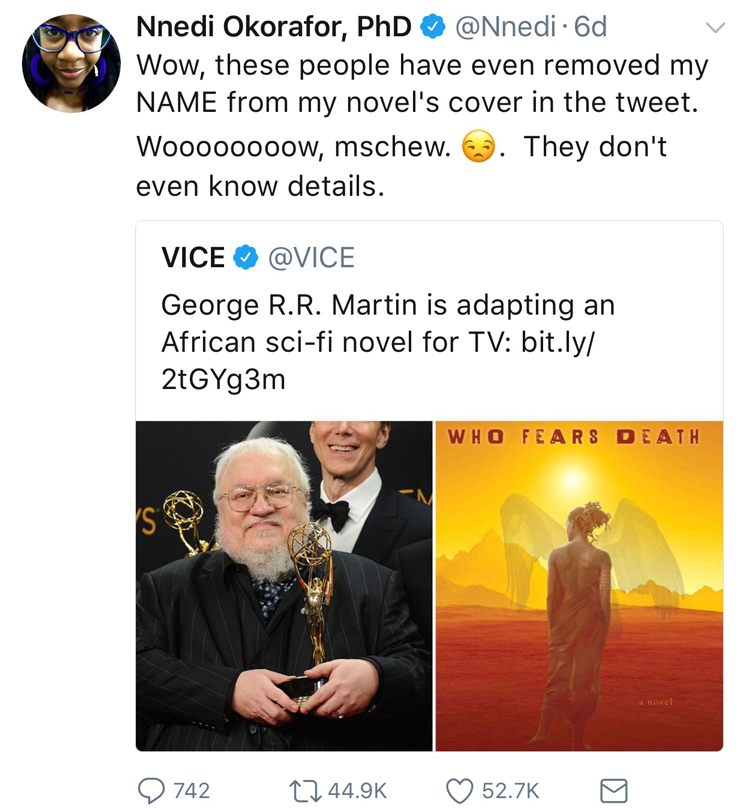 Super Eagles and Wolverhampton FC goalie, Carl Ikeme was diagnosed with Acute Leukaemia last week. The sad news was broken by his club who promised to stand beside him as he fought the deadly illness. Our thoughts and prayers are with him and his family. Below are some tweets from the footballing community, showing support.

Great to see @Carl_Ikeme He was in good spirits and touched my all the love out there for him. Proper top man ?? pic.twitter.com/5MAeLWNBo4

From our players, staff and all associated at the club, here's sending our support and well wishes to @Carl_Ikeme!#1Ikeme ? pic.twitter.com/JGuqYrW5Nv

Supporting the men as much as they support us. Stay strong @Carl_Ikeme, you're @Wolves family are behind you #TeamKemes #WeAreWolves ??⚫️?❤️ pic.twitter.com/v47twbSonA