It is a sad day for Nigerian Twitter as Snikoggs, one of the most popular creators of pun and exceptional wordplay has been exposed as a scam who steals other people’s intellectual property.

The original creator of many of his jokes outed him by screenshotting his’ and Snikoggs’ side by side each other, and we are still overwhelmed.

I've just discovered an account (@Snikoggs) who's been stealing my tweets for months. pic.twitter.com/76z6RF5KcK

After Daniel Edison, a 20 year old pun-writer, posted these and more screenshots, Snikoggs response was that he had gotten the jokes from a closed Facebook group, and the ‘owner’ – a certain Jeremy – had said they were his own and he could use them. 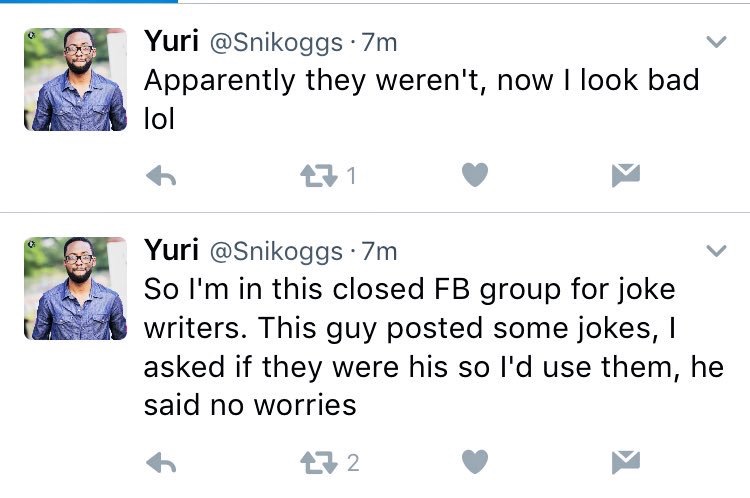 Well, Nigerians are not buying that and after the initial shock, we are, in our usual fashion, dragging the Abuja-based ‘cool’ kid all over the place.

So all this time Snikoggs had a ghostwriter?? I'm sick.

I feel for all the girls who offed pant for Snikoggs off these puns.
Brethren, take a minute and realize they slept with the wrong pun star

Every day for snikoggs. One day for the owner. Tears.

So they employed snikoggs off stolen tweets? And you people say it's just Twitter.

No wonder when we hired him to work for us his puns were so bad we were all wondering is this the same guy? 😭

So Snikoggs, how many of that guy's jokes did you steal?

"Yurily did well son, you see we didn't choose to steal tweet, it Chuzzus" pic.twitter.com/oKGspvooiX

I feel for @DanielEdison_ he's just 20 and he's a REAL aspiring comedian with lesser followers than Snikoggs.

That oyinbo guy was going through snikoggs tweets like pic.twitter.com/Xm2VuGivOI

Hi @Snikoggs u may not knw me, but I retweeted some of d jokes u stole some months back. Pls I need u to refund my RTs sir, no hard feelings

Wow! I feel emotionally defrauded.
All these years and Snikoggs has been scamming me of all my LOLs pic.twitter.com/BOWRU1uv9r

You can see @Snikoggs Nigerian home training is intact tho, mans waited a whole year before lifting the jokes

And snikoggs dey get RTs pass the guy. LMAO

People steal tweet once a while but this Yuri snikoggs own is tough !!!
Baba stole a whole Ugo C Ugo of tweets

God caught Snikoggs on a Sunday, on a Sunday fam, his day of rest. God must have been really pissed and bothered with the theft.

Chuzzus stole so much tweets…he made Ebuka Akara and Snikoggs up their game. But LifeOfBMax is still the legend. Nigga stole my thread.😂😂

Even years ago, when I used to steal tweets it wasn't this bad.

Too smart to watch Big Brother but you're not too smart to be a twitter pick pocket.

I'm perplexed because Snikoggs is not just some guy tweeting jokes. He performs on stage live. But Basketmouth steals jokes too so…

And this is not a lie. See him perform his (stolen? Sounds original) puns live.