The price of success is hardwork, and the prize of hardwork is success. That is the story of young Ali Cynthia Chinecherem, a student of Shalom Academy Nsukka, who made A’s in all the subjects she took in the Senior Secondary School West Africa Examinations popularly called WAEC. The result found its way to popular social network Twitter, and lots of people were beyond wowed and praised her efforts.

Writer and Social Commentator, Chidi Okereke – @Chydee took it upon himself and started a campaign to celebrate Chinecherem – whose plan is to study Medicine in the University of Nigeria, NSUKKA.

If you're impressed by this result and want to dash her something, holla at me. Let us begin to reward educational excellence too. Blessings pic.twitter.com/Wwi1NEVJqm

As expected, Nigerians from all parts of the country and in the diaspora came together and donated N425,500. Someone offered to pay her first year school fees, while another offered to mentor her.

See breakdown of the donations. 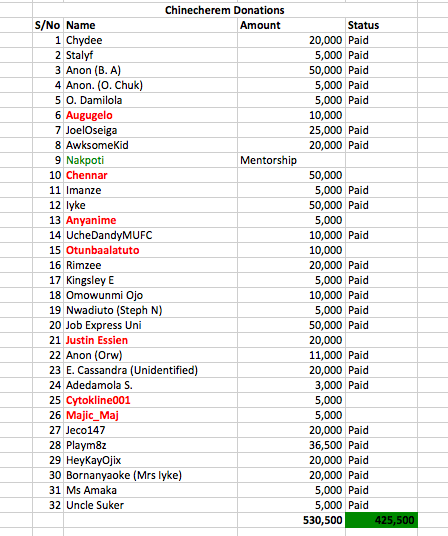 Nigerians are wonderful people and if you were ever in doubt, this gesture should prove you wrong.

See Chydee’s message to everyone who made it happen @Chydee/once-again-twitter-restores-my-faith-in-nigerians-cad521190d40">HERE and see video where Chinecherem expresses her gratitude to Nigerians for the love.