When we announced the Access Family Fortune Promo HERE and encouraged people to take advantage of the offer, many families listened, and on Wednesday, 16th of August 2017, 120 of them were rewarded with fantastic prizes in the first Monthly Random-Selection. 120 families got blessed with prizes ranging from complete 7-seater settees to 49 inches LED Televisions to Shopping Vouchers worth N50,000.

The Random-Selection held in Lekki, Lagos and it was filled with fun, games (for the kids who were there) and plenty of excitement. Audience included celebrities, Bank Executives, families, customers, and representatives of the Consumer Protection Council and Nigerian Lottery Commission who were there to make sure proceedings were ‘mago-mago’ free.

A huge tent was set-up in front of the Admiralty Road branch of Access Bank. A section was carved out for kids to play games and get their faces painted. Guests were treated to music and some refreshment before the selection began.

I was invited to the #AccessFamilyFortunePromo monthly random selection. I have a feeling it'll be mad fun ? pic.twitter.com/dUYuxQAUsi

They talked about the scheme, its essence and how it will improve the quality of their customer’s lives, whilst helping them save.

To select winners for each prize category, two random guests were picked from the audience and it was their responsibility to push the button that ‘spun the wheel’ and another that stopped it.

After winners emerged from each category, a winner was selected at random and called. The reactions of some of them were priceless.

How you laugh when a customer asks if you've paid for the subscription of the @DStv decoder received @ the #AccessFamilyFortunePromo. #TGIF pic.twitter.com/Qt4dFo1fMA

The next random selection produced 30 winners of Shopping Sprees worth N50,000.

They just called Samuel Oludare. He won a voucher to enjoy a shopping spree at select stores. He said "Yayyyy". ?#AccessFamilyFortunePromo pic.twitter.com/kC3fzEpHlf

If you're one of the 10 people who won a Home Theater, thank Access Bank, Ilesanmi and Pandora. They chose you. #AccessFamilyFortunePromo pic.twitter.com/7hC29uzfCq

5 families went home with the Month One grand prize of a 7-seater settee with a center table.

I thought the settee was for only one family. I was wrong. 5 families are going home with beauties like this. #AccessFamilyFortunePromo pic.twitter.com/xqoIReKMUn

Every guest went home with a gift pack. 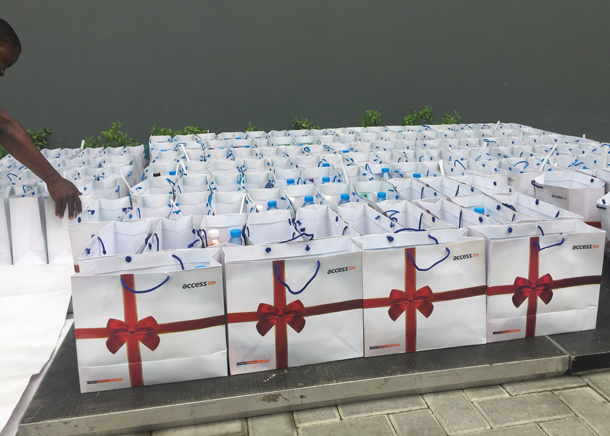 By now you must be wondering how you can benefit from this largesse. It’s easy. Start a Family Banking Scheme for you and your family (or friends); maintain a qualifying minimum balance for 90 days, and you automatically stand a chance of winning big in the weekly, monthly and Mega Random-Selections.

Goodluck to you and your fam.