Past seasons of Game of Thrones have been dogged with leaks, but the security around episodes of Season 7 have been water-tight. Well, until hackers got into HBO, stole thousands of files, and threatened to release future episodes of the highly rated show, amongst others on Sunday, August 6th. Earlier today, medium quality version of Episode 4 – ‘The Spoils of war’ was uploaded on Google Drive, spread to Reddit, and like they say, the rest is history.

First we thought the hackers brought their threats forward a few days, but we can confirm that leaked episode originates from HBO distribution partner – Star India, and is not related to the HBO hack. 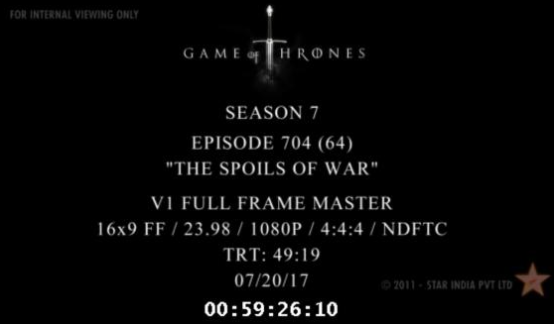 The Indian organization has now issued a statement confirming the leak.

“This confirms the compromise of episode 4 of Game of Thrones Season 7, earlier this afternoon. We take this breach very seriously and have immediately initiated forensic investigations at our and the technology partner’s end to swiftly determine the cause. This is a grave issue and we are taking appropriate legal remedial action.”

SMH. They had one job. Just one job.

Anyways, if you want to watch it, click HERE

More From: Game of Thrones