The name Pablo Ayodeji is synonymous with controversy. If you are active online, you’d have seen him trend a couple times, and it has never been for good a reason. It has been back-to-back messiness, and a desperate need to break his own record of controversy. We are completely flummoxed at how one single individual can be the way he is and we are still trying to rationalize it.

It all began when he went on a ‘date’ with a lady named Ore. Turns out she wasn’t interested in a relationship and told him. The kid went on Twitter and started ranting that he took her out on a date, spent money and she still turned him down. Ore then dropped this tweet that we consider one of the greatest comebacks of all time.

And it has been a downward spiral since then. Despite the fact that many people on Twitter rallied around him when he gave a ridiculous apology for this, he still refused to become a better person. Even notable people like Sola Adio, a popular life-coach, have tried to help him become a better person, but his situation has only become worse. All these led up to his exposition as a fraudster yesterday.

It began when this handle @nuellaa_ag tweeted ‘she’ had lost ‘her’ job and needed money to survive this yuletide. As expected, people responded to the plea, retweeted, reshared and donated money to the provided bank account. Someone then noticed that the handle had previously requested financial support using a bank account that returned the name ‘Adeniji Olaoluwa Ayodeji’. This is the same name in the screenshot from the bank transfer Ore made to Pablo during the #5kBae incidence. The person raised an alarm, confronted Pablo but he denied, saying ‘@nuellaa_ag’ once asked him to send his account details so ‘he/she’ could receive money because ‘it’ was based in Canada. He threatened to block anybody who asked him anything further, because he was innocent of every allegation. Nevertheless, further investigations revealed he had more than a passing relationship with @nuellaa_ag and its former alias ‘shina something’ – the account was once @PabloAyodeji.

These were all speculations, until another Twitter user said Pablo had messaged him for his sister’s account details. 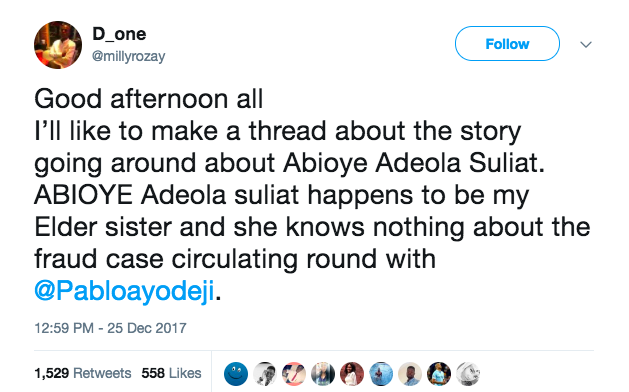 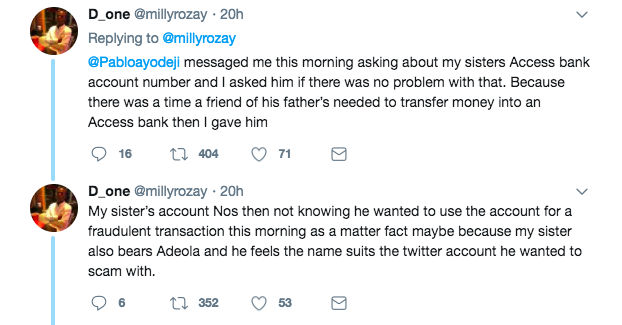 The sister shared the same name @nuellaa_ag was fronting – so when people were sending money, there won’t be any reason to doubt its authenticity. Not knowing what was up, the original Abioye Adeola Suliat had received the monies, made a list of donors and transferred N145,000 people had sent to her account to Pablo. When he was confronted with these tweets, he denied at first, but then, in characteristic Pablo fashion, he agreed he did scam people, and summarily damned the consequences. 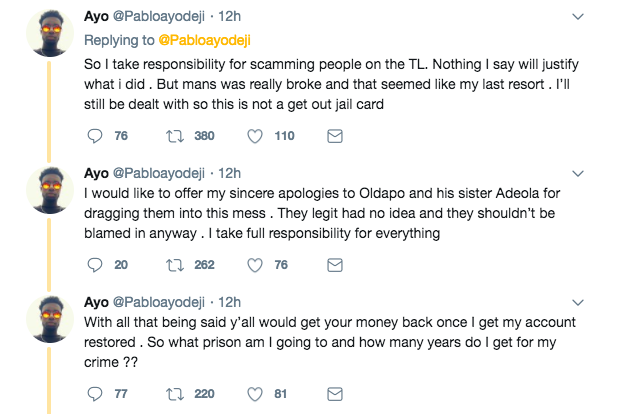 Now you’ve been brought up to speed, we ask again, what is really wrong with this boy? While we’re not sure, we think it’s one of these 10 things. What do you think?

While this part of this listicle may be somewhat satirical, this particular option is actually very serious. We do not make light of mental health issues, therefore we implore anybody who knows Pablo personally to encourage psychiatric evaluation and treatment – during or after he has paid for his crimes. This is most likely what is wrong with him because this pattern of doing shit, blatantly denying, bullishly admitting, unapologetically apologizing and going back to doing worse is inexplicable. He needs to get his head checked.

Has someone ever stripped naked at 12 midnight, and placed a curse on you? That shit works yo! You’ll just realize that your life is one kain, and you cannot explain it, or pull yourself out. Also imagine the person who placed that curse now dies without lifting it. Double wahala. That is probably why Pablo’s case is hopeless. One would have to consult a Grandmaster mystic that can summon dead people to summon the curser, and break the yoke. Only way.

If this is the case, you’ll probably find cotton wool inside his head when you open it. His real brain is in a calabash somewhere in Osun State and to return it, we need to make a sacrifice to the gods. For the sacrifice, we’ll need the left testicle of an adult crocodile, the umbilical cord of a newborn hippopotamus, the large intestine of an albino gorilla, and 7 adult cockerels that have never had sex. Wahala dey.

To finalize the ‘spiritual’ problem possibilities, his issue might be something we do not know. But what we do know is that there is nothing God cannot do. He should be taken to a deliverance minister – there are lots of them in Port Harcourt and Aba – and for a small fee, every demon worrying him will be cast out. If the South East is far, there are many White Garment churches around – where they might ask him to fast for a couple days then flog the spirits out of him. Prophet T B Joshua is also a specialist in these things – remember how he delivered Jim Iyke and made him brand new. All these options are within reach and should be explored.

Again, we do not make light of depression. Yet, while we do not claim to know how depression works, we do know there are a lot of people who are depressed, but minding their depression. There are many people who are poor and frustrated, but they are keeping their business legit. So while depression is an option, it is not reason enough to be this bullish, stupid, unrepentant troublemaker who has now added fraudster to his titles.

Yeap. Nigeria can frustrate you so hard, you find yourself doing things that blow even your own mind. But, like depression, a lot of us are suffering from Nigeria, yet we mind our business, keep things legit and do not go around being douchebags.

This is a personality disorder characterized by a pattern of excessively seeking attention. In other words, no matter how detrimental it is, people who suffer from this disorder do not care, as far as they get attention off it. That is why he basked in the euphoria of the #5kBae incidence, something that will make many other people deactivate their accounts. That is why after denying multiple times, he is confessing to a crime he committed, on social media. The attention is the most important thing for him. And this is the final time we’ll be giving him any of it.

It is possible that Pablo is ‘Big Brother’ and we are all part of his reality show. It is possible this is all a game in some social experiment, because I really don’t understand how one can use his own hand to fvck his own life up, without remorse. Maybe the mission of this experiment is to test how much he can get away with, how forgiving Nigerians are, how bad our law enforcement is, or how accepting Nigerians are of crime. Maybe he is sponsored by the Federal Government to distract us from Fuel Scarcity. Maybe … this actually makes more sense the more you read it. Wow.

Simply because every time he fvcks up, it seems like he is trying to destroy himself by himself, and he doesn’t really care. He has given up on life and anything that wants to happen should happen, as nothing really matters anymore. He is a walking mass of flesh with no purpose beyond existing and exiting the world whenever, wherever, however. This is actually sad.

Absolutely nothing. He is perfectly all right and has mastered the art of being notorious, fronting the blunt guy image, the ‘I may be hard but I’m broken inside’ persona, the ‘it is not my fault I am damaged’ façade. His ‘I am suicidal’ mask is likely a tactic to elicit sympathy and make people more forgiving. He is probably laughing and uncorking bottles of something light with scam money as he posts tweets like ‘I’m ready to pay whatever prize’, ‘I don’t care because I won’t be here for long’, etc. Nothing is absolutely wrong with him, mentally, spiritually or emotionally. He is only another scammer who got caught, and a reflection of the entity called Nigeria.