We have curated the biggest ones here. Enjoy, share. 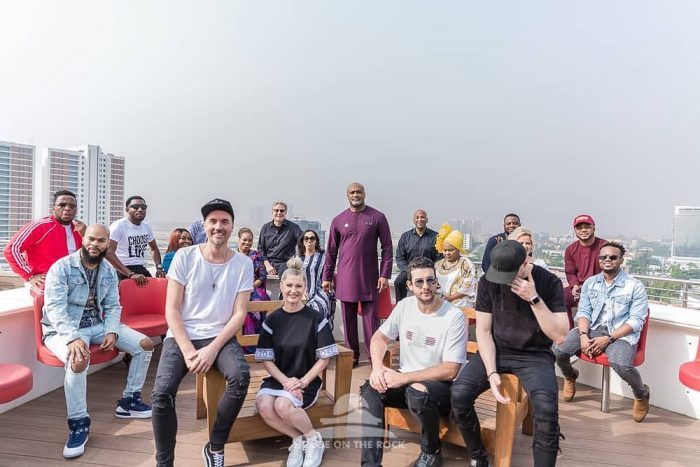 Powered by House on The Rock, The Experience is arguably the largest gospel event in Africa. In its 13th year, the event which holds at the Tafawa Balewa Square features local and global gospel icons like Don Moen, Travis Greene, Tim Godfrey, Tope Alabi, Chioma Jesus and so on. Admission is free.

DJ Spinall is one of Nigeria’s biggest DJs and he will be lighting up the Grand Ballroom at Oriental Hotel on the 7th.

Not sure we need to say anything about these legends. Just wondering if the GET Arena venue isn’t too small to accommodate the number of people who would love to be at the event that is powered by Johnnie Jazz and Whisky.

Simi is one of the most brilliant acts in Nigeria right now, and after selling out London, she is set to return where it all started – Lagos. The venue is the Balmoral Convention Center, Federal Palace Hotel

He may have been recently harassed by the Police, but on the 9th of December, the diminutive medical practitioner will be shutting down the mainland part of Lagos. There will be performances by Duncan Mighty, Lax, Harry Song, CDQ, Mr Real, Reekado Banks, Reminsce and Vector. Tickets cost only N500. 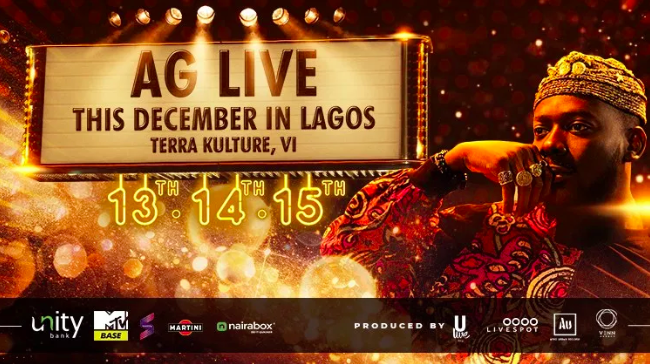 Adekunle Gold has always stood out in the industry. And after a terrific year where he released his second album titled About 30, he is doing something we do not recall anybody doing in a long time. He is performing live for 3 straight days; 13th, 14th and 15th. Amazing. Tickets for the 13th has sold out, so you may want to get tickets for 14th and 15th at Nairabox.

The Basement Gig is a monthly music event that features performances by upcoming acts. It will be celebrating its 2nd year anniversary at The FreeMe Space in Lekki. There will be performances by Yung L, Blaqbonez, Attitude, etc., and entry fee is N1000.

Do you believe that despite all the hit songs he has made, Wande Coal has never headlined his own show in Nigeria? Well, that is about to change. He will be shutting down the Eko Convention Center on the 14th of December and we are here for it. Tickets range from 7500 (regular) to 3 million (Platinum)

One year after debuting the “Mayor of Lagos” concert, Mayorkun is back with the second edition. The DMW artiste will be shutting down the Balmoral Convention Center at the Federal Palace Hotel, VI.

Wizkid needs no introduction, so all you need to know is that on the 16th of December, he will be live at the Transcorp Hilton Hotel, Abuja. Tickets are available on Nairabox.

Mavin act and one of Nigeria’s finest rappers, Ladipoe, pill be having his concert at the Upbeat Center, Lekki Phase One. Tickets cost N2000 only.

Dremo may not be as heavily rotated as other DMW acts, but he is holding his first concert as a headline act nonetheless and he is ready to serve everybody hot hot. Make it a date at the FreeMe Space, Plot 16A, Block 139A, Nike Art gallery road, Ikate Lekki.

Do you consider yourself a VVIP? As in a VIP with an extra V? If yes, then you may want to be at the Eko Convention Center on the 19th of December as global superstar, Wizkid Ayo Balogun gives his VIP fans an exclusive performance. Enough said. 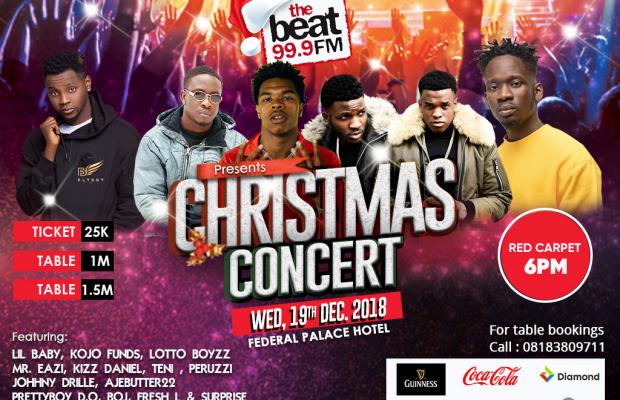 Beat FM is one of the biggest radio stations in Nigeria, and every year, they thrill music lovers with a concert that usually includes an international act. This time, performances will include Lil Baby, Kojo Fundz and Lotto Boys. Other artistes are Kizz Daniel, Mr. Eazi, Peruzzi, Teni The Entertainer, Johnny Drille, etc. Tickets cost from 25k (regular) to N1.5m (table). Enjoy.

DJ Tunez is gathering some of the finest acts in Nigeria for Blackout – an Afrobeat show popularized in NYC, and we are here for it. Performers will include Wizkid, Sarz, Reekado Banks, etc.

Afropolitan Vibes has become a regular (monthly) event that music enthusiasts look forward to. And on the 21st of December, The Bantu collective will be performing alongside Reminisce, Moelogo and Falana at the Muri Okunola Park, VI.

Flytime is one of the biggest event promoters in Nigeria, and they are having 3 back-to-back concerts, the first of which is the hugely popular Rhythm Unplugged. There will be performances by Davido, Duncan Mighty, Tiwa Savage, Burna Boy, etc.

This is another concert that everybody should attend. As Afrobeat continues breaking boundaries internationally, heavyweights like Patoranking, Timaya, Runtown, Tekno, Mr Eazi, Femi kuti and Seun Kuti – the recent Grammy nominee will be performing at this festival holding at Eko Atlantic City, Lagos

For 4 years, Olamide has given us OLIC, his always sold-out concert at Eko Hotel and then the National Stadium, Surulere, last year. But on the 23rd, in collaboration with Flytime, Olamide Live will return to Eko Hotel, and the king of Yoruba Hip Hop will be thrilling his fans. This one should not be missed.

Still do not know why Wizkid and Olamide scheduled their concerts for same day, but on the 23rd, the young Lion will be catering to his (non VVIP?) fans at the Eko Atlantic City Festival Grounds, VI. There will be performances by Tiwa Savage, Maleekberry, Runtown, Burna Boy, Duncan Mighty, Slimcase, Mr. Eazi, etc.

Odunsi will be hosting his fans and friends to an intimate evening where he will perform songs from his album, RARE. 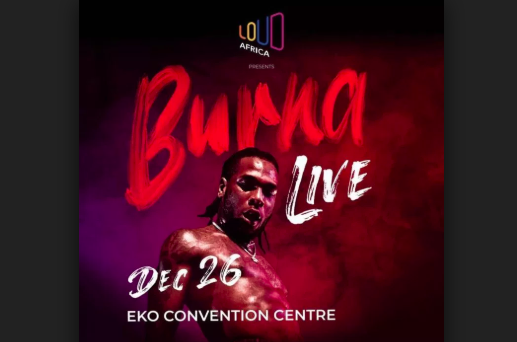 Without doubt, this has been the year of Burna Boy. He has made hit after hit, performed at sold out concerts and on the 26th of December, he will be thrilling his fans at the Eko Convention Center. Tickets are selling out fast, and you may want to get yours at Nairabox.com.

Arguably the biggest food event in Nigeria, the Sterling Bank sponsored festival will bring food lovers together in a two day event at Lekki Phase One.

Music group – Show Dem Camp – will be performing songs off their recently released Palmwine Music 2 album at the Palmwine Music Festival. If you are a fan of the rappers/alternative music, then you should be there that day.

Imagine Seyi Sodimu, Styl Plus, Paul Play Dairo and Olu Maintain on one stage. Stop imagining. On the 29th, all of them will light up Eko Convention Center and evoke nostalgia at the Grown and Sexy Concert.

Away from Lagos, Flavour N’abania will be setting Anambra state on fire as he holds his concert in the capital. Regular tickets will be free, so you know it’s about to go down!!!

Mama Africa and multiple award winning songstress, Yemi Alade will be blessing the people of Abuja with her performance on the 31st of December. You may not want to miss that one.

Last but definitely not the least are the events sponsored by Pepsi in their #NoChillDisembaa campaign. From Cuppy with Special Guests to One Lagos Fiesta to Warri Again and Davido’s concert, the beverage brand will be shutting down the state on various days. Follow their page @Pepsi_Naija for details on how to attend them. You’re welcome. 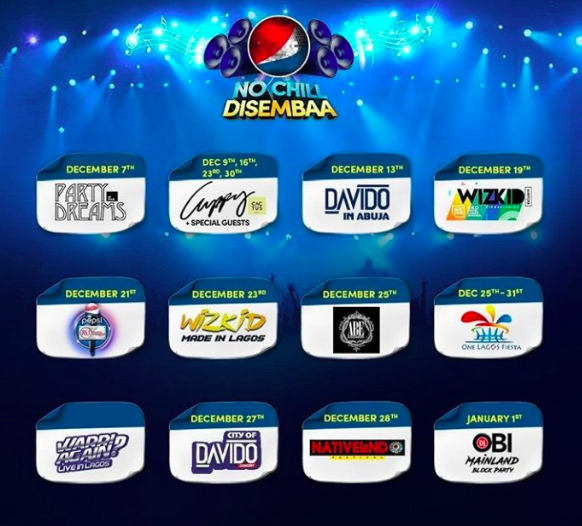 Which one of these many events will you be attending?